The Oxnard Police Department Special Weapons and Tactics Team was formed in 1970 and was initially called the Special Enforcement Team (SET). This formation was partially in response to the deployment of police personnel at the Isla Vista riots that occurred that same year. The initial team was composed of seventeen members: including one lieutenant, four sergeants, and twelve officers. This initial team appropriated most of their equipment from the military, and trained on their days off, voluntarily. The Special Enforcement Team spent the next twenty-eight years improvising and improving, responding to situations beyond the tactical ability of the normal patrol officer, and assisting with the service of high risk search warrants.

In 1997 the team was reorganized, and has taken the form of today’s current Oxnard Police Department SWAT Team. The team consists of a total of twenty-two tactical members, including one SWAT Commander, one SWAT Training Sergeant, two SWAT Sergeants, two SWAT Senior Officers, and sixteen SWAT Officers. The Crisis Negotiation Team (CNT) is an integral part of the SWAT team and deploys with SWAT. The twenty members of the tactical element of the SWAT Team are divided into three squads, with each squad consisting of one SWAT Sergeant, one Senior SWAT Officer, and five SWAT Officers. The equipment and weaponry of today’s SWAT team is modern and provided by the Oxnard Police Department. Training for today’s SWAT team is a minimum twenty hours a month during scheduled work days. The Oxnard SWAT team trains in conjunction with other units of the department including the K-9 Unit and the Crisis Negotiaton Team.

Today’s SWAT team is responsible for handling high risk situations which challenge or exceed the weaponry or training level of patrol officers. The members of the Oxnard SWAT team also comprise the Special Enforcement Unit, or SEU. 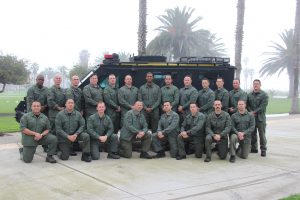 The SEU also provides an on duty tactical response that is able to respond to high risk situations and assist patrol officers faster than ever before. SEU officers also carry and are trained in the use of “Less Lethal” weaponry. The SEU is also tasked with other special enforcement duties. These enforcement duties include working in conjunction with other County, State, and Federal agencies in the apprehension of wanted subjects, working high saturation patrol in high crime areas, crowd control, dignitary protection, surveillance, and the tactical training of others. These duties are performed in both uniformed and plain clothes capacity.

The SWAT Team is called upon to resolve several different types of high risk / tactical situations. These may include, but are not limited to, the service of high risk warrants, hostage situations, barricaded subjects, high risk building searches, and area searches. Often times these duties are performed in conjunction with the Oxnard Police Department K-9 Unit. By using a K-9 team during a search for a subject, the search is not only more effective and efficient, but the risk of harm to the suspect and the officers is greatly reduced.

The selection process for the SWAT Team is a rigorous process. Not only must candidates meet the minimum requirements, they must have demonstrated above-average performance as a Police Officer, be in excellent physical condition, complete an exhaustive oral board interview, undergo a peer evaluation by the other SWAT team members, and demonstrate a proficiency with firearms and tactics. Once on the team, SWAT team members must maintain physical fitness, the inner drive to excel, a stage of mental preparedness, a willingness to constantly train, and the ability to remain on an on call basis when off duty. 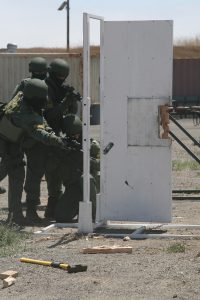 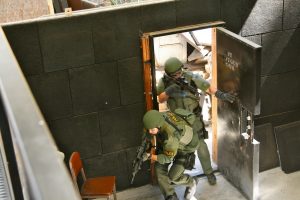