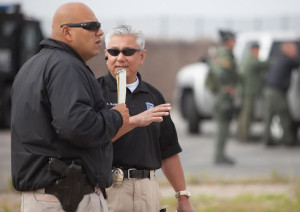 The Oxnard Police Department Crisis Negotiation Team (CNT) responds with the SWAT Team during critical incidents. Over the years, the team has developed into a fully staffed, trained, and equipped negotiations team capable of conducting extensive talks with hostage takers for the purposes of verbally deescalating a conflict in lieu of risking a confrontation.

CNT consists of nine members and a sergeant. Each position has a specific role and responsibility. The CNT sergeant has overall command and control of the team and interfaces directly with the SWAT commander. The CNT team leader directly supervises a negotiation and has administrative and training duties. Negotiators are tasked with the most comprehensive and diverse responsibilities, filling various positions. Each negotiator is trained to conduct negotiations with a hostage taker under a variety of conditions and environments.

CNT responds with a trailer outfitted as an office containing telephonic and radio equipment. In addition, the team has developed the necessary supporting technological expertise. All negotiators attend a Basic Hostage Negotiator school, then subsequent intermediate and advanced schools. In addition, training is conducted in areas of crisis intervention, mental health, and psychology. The sergeant and commander receive training specific to an CNT commander.

CNT is a collateral assignment for selected officers and meets on a monthly basis for training and equipment maintenance. Training is organized in a repetitive plan so that perishable skills maintained. Active listening and behavior influence are stressed as well as assessments for mental health, suicide, and the likelihood of resolution. In addition, negotiators train to deal with juveniles, terrorism, drug induced captors, and in the Spanish language. Oxnard CNT interfaces with police and sheriff agencies around the tri-counties for training, equipment review, and discussion about changes in trends.

CNT is a collateral assignment for selected officers and meets on a monthly basis for training and equipment maintenance. Training is organized in a repetitive plan so that the perishable skills are refreshed. Active listening behavior influence, and risk assessments are stressed.